Finally. Ever since I came to Chamonix in 2012 I’ve looked up at Mont Blanc every day and had various summit plans fail for different reasons; bad conditions, work commitments etc, but yesterday, finally, I stood on the summit of the White Mountain.

We took the Gouter Route which takes 2 days to summit. 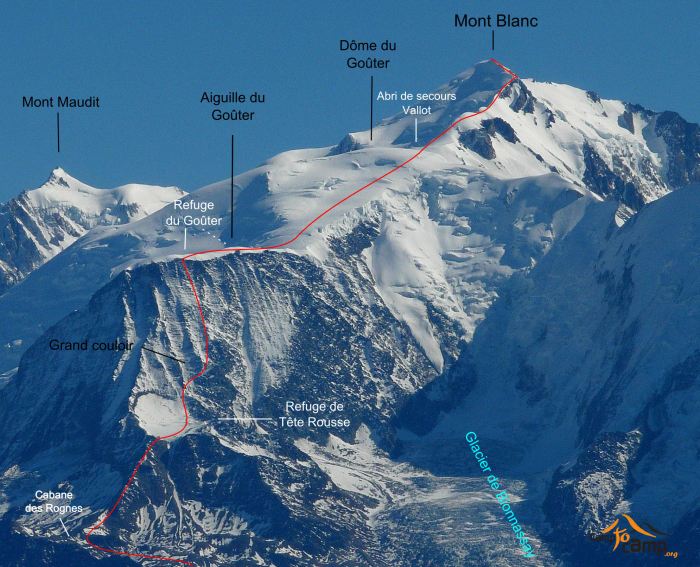 The route is not technical, but it’s a long slog so requires good concentration and mental strength. The train from Les Houches drops you at the Nite d’Aigle at 2,372 m and that’s where the route begins.

It’s a two hour hike up to the Refuge de Tête Rousse (3167m) which sits on a flat section looking up at the intimidating west face of the Aiguille du Gouter (to be climbed on the second day) and the impressive north west face of l’Aiguille de Bionnassay standing tall at 4,052m.

The afternoon was relaxed, sitting around chatting with other climbers and reading. Then dinner, then sunset, then bed.

We set off at 02:00am from the Refuge de Tête Rousse, in order to cross the Grand Couloir before it was too warm (see the map). Warmth generally means more rock fall. The Grand Couloir tragically took 3 lives in the past few weeks with another seriously injured all in separate incidents. It’s an area that’s very prone to rockfall mostly in the afternoon as the snow melts. Nature is an unpredictable force though, and 20minutes after we crossed the couloir at around 02:30 we saw a huge rock fall that would of swept away anything in it’s path. Lucky.

It’s a fun scramble up the ridge once the couloir has been crossed and we reached the top just in time for sunrise.

From here it’s a slog. There’s no other way to put it. 5 hours of slogging. First up and over the Dôme du Goûter, then to the Vallot refuge which is an emergency hut, 400m from the summit. Here we took on water and ate snacks before the final push to the summit. 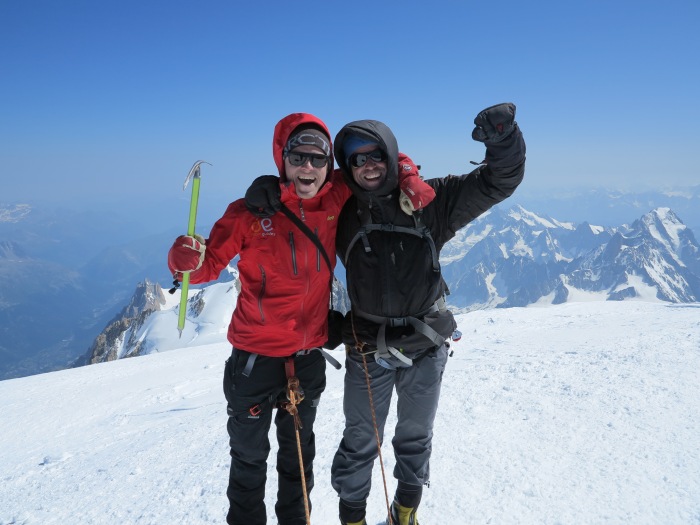 The summit itself is an anti-climax. It’s flat. The ridge, however, leading up to the summit is exposed, windy and difficult because of the altitude. The view from the summit is amazing. To the south is Italy, to the east is Switzerland and to the north and west is France. The last 500m of ascent were tough due to the altitude mainly but we made it comfortably in the end.

The descent was hard for me, because all of my energy was put into reaching the summit. This plus the altitude made for a scrappy descent, with a few slips, back to the Refuge du Goûter which sits at 3817m.

We spent the night and made it back to Chamonix the next morning, tired, smelly but happy to have finally done it.